The last post I wrote about a puppy was about how we weren’t getting the one we picked out in early May. But, somehow between finding that out on June 26 and flying home on June 28, we found a puppy on June 29 and picked him up on June 30. A bit of a whirlwind, to say the least!

We went to visit the three remaining male chocolate lab puppies. The owners told us about each of their personalities and we decided to get the laid back one. He was just sitting there watching his brothers jump all over the place. He has those sad looking lab eyes and I couldn’t say “no” to him. Brad agreed and 10 minutes later we were walking out the door with a 8-week-old puppy! 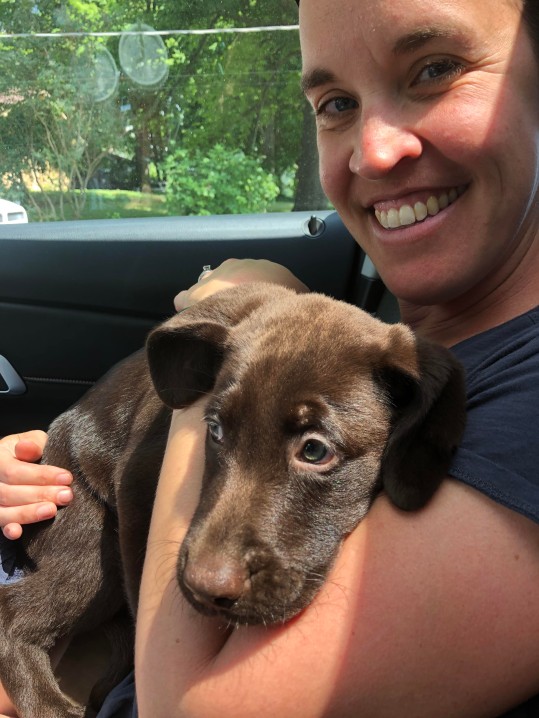 I knew what we were in for – Denali prepared me. Even though it was 10 years ago, I remember the first few nights at home with Denali. She cried in her crate. She had diarrhea in her crate – multiple times in multiple nights. She did not want to be on a leash or go for a walk. I picked her because she was the runt and the markings on her face made her look angry – I should’ve known better!

Needless to say, I was expecting some long nights with Steve (yes, our puppy’s name is Steve!). As we drove home, he was calm in my lap. We got home and went to the yard – again calm. We brought Denali out to meet him – she was less than thrilled but he was eager to sniff her.

We spent the first day playing and getting to know each other. We took him outside a lot. I use a bell on the door to help house train – so every time we went outside to potty, I rang the bell. Soon enough it was time for me to go to bed (jet lag was in full force at this point). Brad agreed to take the late shift, expecting to have to sleep on the couch. I set my alarm for 5:00 am.

Brad came to bed at 2:00 am because Steve took right to his crate. He didn’t cry all night. In fact, he hasn’t cried once in his crate.

At first Steve would whimper when he needed to go out but he soon learned to go stand near the door. And, as of the middle of this week, he started using the bell. He’s too smart though – he also uses the bell when he wants to go out and play! We’ve had him two weeks and there have been no accidents in the house (there may have been one, but we didn’t see it, so we’re not sure).

I had to go back to work on Monday (less than 48 hours after we got him). My routine is to take Denali for a short walk every morning before work. Steve had only been on the leash for a brief time the day before, but I figured I’d give it a try… I put leashes on both of them and we went for a walk. I had to pick him up occasionally to give him a break, but otherwise he followed Denali. Now, at two weeks home, I don’t pick him up at all on our morning walks.

Denali wasn’t sure about him at first. In fact, she was pretty rough which was concerning. However, we soon realized she was setting some boundaries. She was doing what older dogs are supposed to do – and it turns out she’s really good at it. Slowly she started letting him get closer to her. She’s not a protective dog so she doesn’t care if he plays with all of her toys or roll around in her bed. She did keep him away from her rawhide and he respected the boundaries she set. Now, two weeks later they play tug-o-war and chase each other around the house. It turns out having an older dog around makes raising a puppy a lot easier – built in babysitter!

Steve loves to cuddle – he likes to lie near one of us while he’s sleeping. He’s on a good routine and takes lots of naps! He also snores which is about the cutest thing ever. 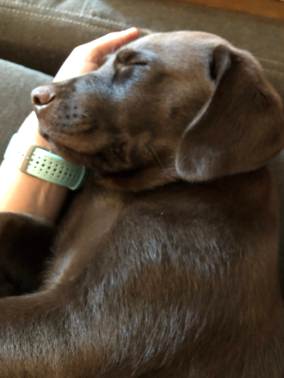 I don’t know how much he weighed when we brought him home, but at 10 weeks he’s 18.7 pounds. He’s gonna be a big boy! He’s such a good dog and I’m so grateful everything worked out the way it did – this pup was meant for us. 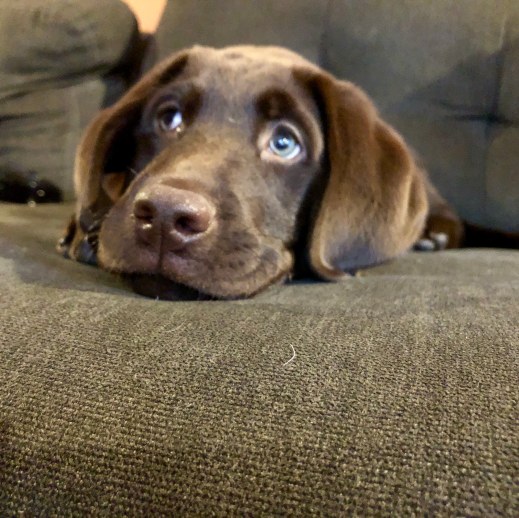