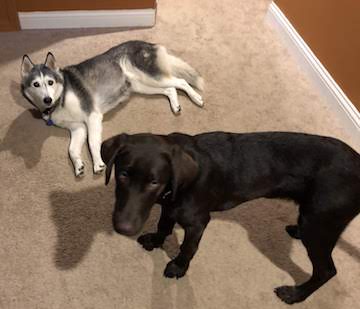 The plan was to get a puppy when Denali was around 8 years old. We figured it would give her a boost in energy and give me the boost I’d need when the inevitable happened. It was a good plan, but I figured it would never come to fruition because of the other plan — starting a family, having a baby. I loved the idea of getting a puppy, but I knew once I got pregnant it wouldn’t happen. I knew the puppy plan would be put to the side and returned to at a later date — much, much later.

So much for plans. The one I was counting on, the plan that I had all worked out in my mind — that second plan fell apart. And then I was just too sad to think about a puppy. Denali was enough for me.

But then I started to come out from the fog and thought about that plan again — the first one, the puppy plan. Denali was almost ten now. She’s set in her ways. She’s a bit grumpy. I began to wonder if getting a puppy would be the best thing for her. I started to doubt the plan.

Despite the doubts, we moved forward with the plan. We needed to find a puppy that would be born in late spring so that we could bring him home mid-summer. So I searched. I researched and googled and finally found our puppy. We picked him out and I got pictures with him that I immediately sent out to everyone because that’s what I do. I immediately share, I don’t delay. I didn’t consider that this puppy wouldn’t be ours because he was ours — end of story.

But that wasn’t the end of the story — it never is. He wasn’t well enough to come home with us. It was at this point that I started to think the Universe was against me. I really began to wonder what I had done wrong in my life that would lead to another disappointment.

However, if I’m completely honest here, I was a bit relieved. I was nervous about getting a puppy. I remember Denali’s first year — it was hard. She was a challenging case and that’s all I had to compare to. Is this really the best time to get a puppy, I began to wonder. Aren’t we stressed out enough? Wouldn’t it be better to just let things be for awhile? I thought all of this, but I kept pressing forward. I wanted a puppy, despite my internal hesitations.

When I got home from Spain I went into immediate search mode once again and found our puppy right away. A few days later we brought him home and he was ours.

In the midst of a really stressful time for Brad and I, we brought home a two month old puppy. Some thought we were crazy. I didn’t disagree. And yet…

Steve was the missing piece to our little family. We may not have two-legged children, but we’ve got two four-legged companions. Denali is still grumpy and often looks at me with disdain, but Steve has put an extra pep in her step. He makes us laugh all the time. He cuddles and likes to get his pillows situated just right. He gets so excited about eating that I’m afraid his tail will fly right off.

A couple weeks ago I needed to work on a quilt project but I didn’t want to put Steve back in his crate since I had been at work all day and Brad was out of town. I knew leaving him out was risky, but I was willing to give it a try. I sewed for over an hour — maybe two, I can’t remember. As I was walking down to the basement I told myself, Whatever you find down there is not his fault. You left him alone. Don’t blame him for it. I really didn’t know what I was going to find. I walked down the stairs and saw him curled up on the couch and Denali snuggled in her bed. Nothing chewed, nothing destroyed — just two pups taking it easy. He’s not even six months yet!

Steve is an answer to prayer — a prayer for peace and healing, a prayer for joy and wholeness. Steve is an angel covered in fur (as is Denali!). From day one he’s adjusted to us and our house as if he’s been here from the day he was born. He has never whined in his crate — not even the first night! Although we’ve since gotten an invisible fence, he could be outside without a leash. For the first few weeks and even months, I kept waiting for his “real” personality to come out — I just couldn’t believe that he was actually that good. However, as the day of his 6th month on earth comes this week, I think I can safely say this is who he is. The puppy we were meant to have. The gift from God that I needed.

Steve will never replace a human child, I know that. However, he is filling a hole I thought could never be filled. He is adding a spark to my life that had been missing. He is the extra life we needed in our house. God answers prayers in many ways and I know many people are praying for us. They are praying for a very specific outcome. I get that. But sometimes prayers are answered in ways we don’t expect. Maybe in this case, Steve is the answer. 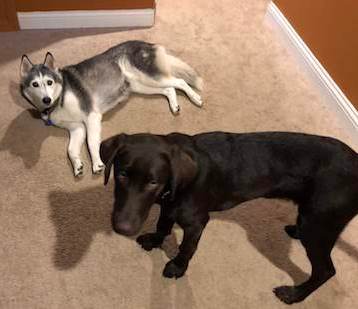 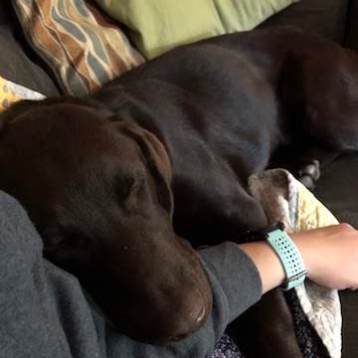 1 thought on “An Angel Covered in Fur”