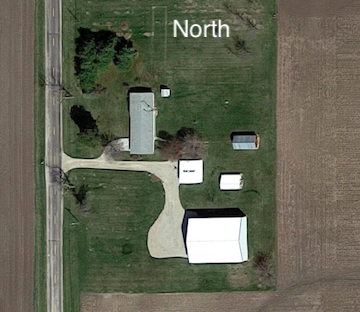 According to my memory, Sunday mornings at my grandparents’ house were always sunny. They were quiet too, which suggests that my memory may not be exact. Although this may not be true, I am certain that it is True.

Being the daughter of two preachers, Sunday mornings were usually hectic, for my parents at least. I don’t remember waking up to the smell of breakfast — I probably just made myself a bowl of cereal. Mom was usually gone first since she had to drive to her church. Dad’s church was across the driveway; he had an easy commute. As did we.

I don’t remember how we got to church — did someone tell us what time we needed to leave? Did my older brother walk us out the door? Did I just innately know — time for church! — while my younger brother and I walked over alone? I don’t know. I wish I could remember more. It’s like there are these large black holes in my mind where memories should be. Why can’t I remember those but recalling Sunday mornings in the middle of Illinois come back like I was there yesterday? I could get to their house without GPS or a map and yet I can’t remember how I got to church week after week as a child. Strange how the mind works, or doesn’t.

I suppose our Sunday mornings weren’t too busy. We could sleep in if wanted, maybe watch TV. I could read or play outside. But, there was something different about Sunday mornings at my grandparents’. There was no rush, no worry about getting everything done in time. Maybe they worried, but I didn’t.

They always got up before the rest of us. I don’t know how they did that with at least two grandchildren sleeping on twin size mattresses on the floor of their bedroom — one near grandma’s side and one in front of the closet. Somehow they snuck out of the room without waking either of us.

It wasn’t long though before I would wake up, being the early bird that I am and probably always have been, and meet them in the kitchen. Sometimes I’d see them sitting on stools at the counter reading the Bible together. That was also the time that one of them would update the wooden block calendar sitting on top of the fridge. A new day to acknowledge. The Bible resided up there too — both the Bible and the calendar, out of the way but visible.

In those quiet moments before the rest of the house started stirring, it was so quiet. The sun shone through the east window — that’s how everything was described, by the direction. It shouldn’t be that hard to figure out in the middle of midwestern farmland — the sun rises over there, east; the sun sets over there, west. However, it took time for all of that to sink in. When I hear myself describing locations based on the direction I’m in awe — though I’m not sure why.

The dining table was right there by that window, the one facing the east. I’d sit at the table looking through the newspaper — The Pantagraph. I’d grab the comics or ads knowing the rest of it really didn’t matter to me. They would look at the obituaries.

Those rays of light always reflected dust floating through the air. I never saw my grandma dust. I’m sure she did before we arrived. I know my grandpa did — after grandma died he’d tell me about the days of cleaning it took to prepare for our arrival. He’d clean, then nap. Then maybe clean some more, or not. I told him it didn’t matter, but he cleaned anyway.

The smell of coffee and bacon and pancakes got the rest of the house moving. My uncle sat down in the recliner in front of the TV. If he had the footrest extended, he’d have to lower it anytime someone walked by. It was a tight space — the whole house was a tight space and yet I felt so open and free there. I’d curl up on the davenport (you know, the couch) and watch TV with my uncle. I’d try to get a free shoulder from one of parents and snuggle up next to them.

We’d watch the Today Show, or sometimes CBS Sunday morning. Those Sunday mornings felt so slow, so calm. We’d take turns in the bathroom. We’d slowly get ready for church, one by one. And, somehow, in the midst of all of that grandma was preparing dinner — on Sundays lunch became dinner and dinner became supper. Maybe dinner was supper throughout the rest of the week too, but I know lunch was dinner only on Sundays. I think.

Before you know it, we were all dressed for church and heading out the door. Those moments before we left — dinner in the oven, breakfast put away, the TV turned off, newspaper still scattered across the table, the bathrooms finally empty. My grandma gave the house one last look as she grabbed the Bible from the top of the fridge and walked out the door.

There’s no way it was quiet. There were at least eight of us in that small three bedroom house. At times there were up to thirteen. This was not a magic house — rooms didn’t appear out of nowhere. We were crammed in there, vying for the bathroom, constantly doing laundry. But we all fit and somehow, Sunday mornings were always quiet.

This morning I found myself in the presence of a sunny, quiet Sunday morning. The dogs were playing, I was telling Steve to “leave it” and yet somehow, it was quiet. Just like those quiet mornings at my grandparents’ house.

The sun shone through the east window and I sat nearby reading. I saw dust floating through the air too.

Every now and then I hear myself saying, “I wish you could’ve met my grandpa, you would really like him” or “Grandma would love to be here for this.”

They were here this morning. I felt them during my own version of a sunny, quiet Sunday morning.