I was particularly excited about this quilt top when it got reposted on the Missouri Star Quilt Company Instagram page. Talk about a fan girl moment!

Fast forward two years. I decided this year I would finish all the WIPs (work in progress) sitting in my closet. I started with this one and was really excited to see the final product.

Taking a tip from another quilter I follow, I went to Target and bought a flat sheet to use as the backing. I spray basted it, but after the fact realized I didn’t have the sides pulled taut enough. The back doesn’t look as great as I hoped it would.

On top of that, for reasons I still don’t know, my machine skipped a ridiculous amount of stitches on this quilt. I used a zig zag stitch for half the quilt and straight lines for the rest of it. It didn’t matter what stitch I used, it skipped. I cleaned it. I changed needles. I rethread it, many times. I stopped and took a break. I tried again. I practiced on other fabric and it was fine. I went back to this quilt and it skipped again.

Toward the end I just wanted it to be done. I knew the quilt wasn’t going to turn out the way I hoped it would. I wish I had used a lighter thread color. I wish I had stopped early on and figured out the skipping problem. I wished, but that didn’t change anything.

This quilt that I was so excited to finish turned out to be really frustrating and that was a huge disappointment.

I was disappointed because it was so imperfect.

And then I took some photos of it, because as imperfect as it is, the quilt still deserves to be seen. And, when I tried to hone it on the mistakes to get a picture, I couldn’t find them. (Don’t worry, later when I was showing Brad, I found several skipped stitches – they are still there!) 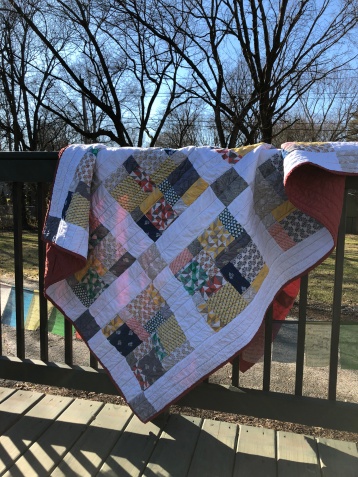 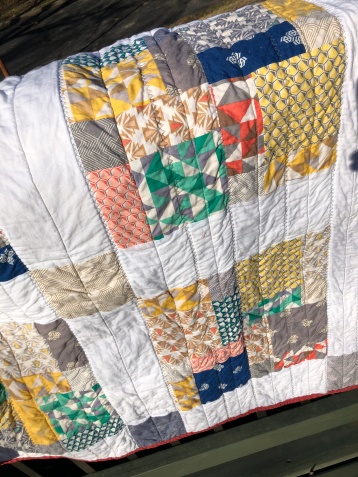 Brad likes the thread color. He thinks it looks great. Had I not pointed out what a skipped stitch looks like, he never would have known.

I suspect that would be the case with any other non-quilter in my life too (which happens to be almost everyone in my life!).

I wanted it to be perfect. I wanted to start the year with a completed WIP that soared above expectations, that made the repost on Instagram worthy of another one.

But, here’s something we all know and yet often forget: we aren’t perfect. We will never be perfect. We may perfect one thing if we practice enough, but that won’t carry over into everything in our lives.

Yesterday I finished a quilt for someone else and there were no skipped stitches. So, what’s the deal? What does this imperfect quilt have to teach me?

I have it hanging up with some other quilts. I still feel a little annoyed when I look at it. Maybe when the annoyance disappears, maybe when I can see the beauty despite the mistakes, maybe then I’ll know the purpose of this quilt. Until then, it will hang there and I will wrestle with my imperfections each time I look at it.