We’ve got 5 very large Rose of Sharon trees/bushes on the south side of our house. Two years ago we cut them back a little, but nothing major. This year, however, every time I come back from taking Denali on a walk, I see those bushes and cringe. They are out of control. Just looking at our house, you can tell this is a part of the yard we don’t spend any time in. It isn’t pretty.

Earlier this summer while putting in some new plants and thinking about what care was involved with them, I decided to look up what to do about out of control Rose of Sharon. If they aren’t maintained on a regular basis they do have a tendency to get a little wild. The website I read suggested pruning it back two thirds to get it back to the way it should look. In addition, I need to cut out all the dead branches and take out the suckers, the little branches coming out of the bottom or sides that take away nutrients from the main branches. Finally, I should take out enough branches to be able to see light through the entire plant. With all the bushes we have, I knew this would take a lot of work.

On Saturday, after mowing the yard and trimming a couple other shrubs, I decided to tackle these guys. Once I get started in the yard on a beautiful day with limited amount of mosquitos, it’s hard for me to find an ending point. When I first started cutting out branches, I thought I’d just work on one or two then come back another day for the others. I should have known better! I got out my clippers and started cutting and cutting. About an hour later I had a huge pile of branches. I could see the side of the house again. I could see light through the bushes. All the branches that were pressed up against the house and carport were now gone. If my house could sigh, I think it would have in that moment – “ahhh…that feels nice!” Everything just looked freer.

As I was pruning, I thought about my own life and the times I’ve had to prune. The most painful times were when I had to prune relationships. I’ve had those “suckers” – the ones that just suck the life out of you, the ones that keep you from the nutrients that you need. Often I didn’t realize what was being sucked out of me until I was so far in it that pruning was very, very painful. But I had to do it and once the pruning was over, once the open wounds began to heal, I felt free. I wasn’t being dragged down anymore; I didn’t feel so heavy.

When I started letting go and cutting back, I began to see more light. There was more space in my life. People asking more from me than they were willing to give no longer bogged me down. Technology no longer had control over my minutes and hours. Conversations were filled with interesting stories about places and day-to-day life rather than details of people’s lives that were none of my business. Life felt lighter, freer, easier.

Lest you think I’ve got it all figured out, I am still on Facebook too much and often get sidetracked by gossip. My ego loves it when people need me, despite the fact that it drains me and leaves me empty. Pruning isn’t a one-time thing. It’s constant. And, like the Rose of Sharon, I often don’t think about pruning until I’m completely out of control.

One other thought about pruning – it’s not my job to prune your dead stuff away. I’ll admit, while I was out there pruning on my side of the house, I kept glancing over to the shrubs just a few feet away from me. There are large weeds growing out of the shrub. It would have taken just a few minutes for me to cut these out and change the whole look of one side of my neighbor’s house. But…it isn’t my job to do her pruning. I can’t cut back the dead branches and the suckers in her life. She has to do it for herself. As tempting as it was, I had to honor her work and let her discover it for herself.

Pruning may be communal work at times, but it can only be done when the others are ready and willing. If my neighbor ever came over and asked me to help her with her yard, I would grab my gloves and clippers and help her in a heartbeat. Until then, it’s not up to me to do her work.

There’s a strange thing about pruning – in order to produce new life, more fruit, you have cut some things away. You have to cut it back to make room for new life – one of the many idiosyncrasies of this world. I think I’m doing a lot of pruning during this time away – it’s not always obvious or intentional, but it’s happening. Perhaps that might explain some of the pain I experience now and then. Pruning takes work – hard work, but when I am willing to put in the blood, sweat and tears, the result is beautiful and so worth it. 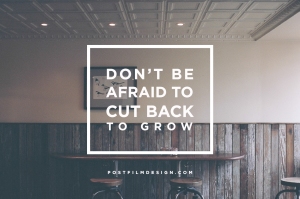